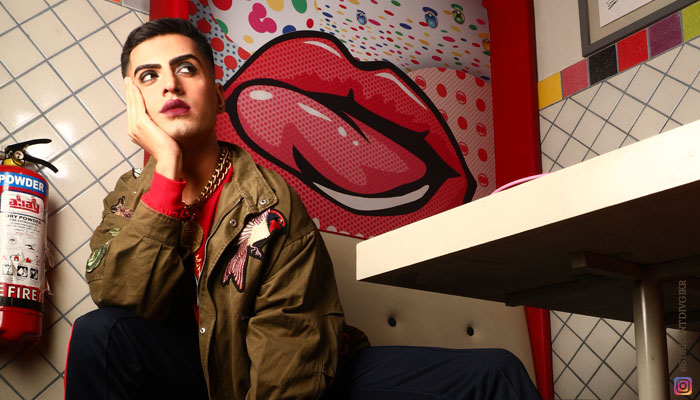 While makeup for men was deemed a disaster in the Victorian era, it took some ultra-fabulous men of the 60s to 90s to pull the world out of this gender stereotype. I mean who doesn’t worship David Bowie, his music and his iconic red lipsticks? And we can’t even imagine how Prince mastered the perfect cat-eye liner long before women could.

But even then, makeup for men was considered a ‘rockstar’ thing. Dark eyes, some shadow and tinted lips made into men’s vanity kits only for on-stage performances or gala events. But what about men who love makeup?

It took Instagram and a gender revolution for men to come out and say, hey, we like to look a certain way and you have no right to judge us! With Adam Levine, Harry Styles and Adam Lambert giving us looks to swoon over, we finally have an era that rejoices men who wear makeup.

We got in touch with our own Sushant Divgikar, actor, model, performer and most importantly, a singer with voice(s) of gold! A true icon who has broken all sorts of societal barriers, Sushant tells us about his experience, challenges, and some wonderful beauty secrets.

P.S. We love him! Here’s a clip of him singing:

I hope you were well and safe throughout last year. How did the quarantine turn out for you as an artist?

Sushant: Well, it was hectic. For artists especially, we didn’t know what to expect and when things would open up and get back to some sort of normalcy. For me personally, I learned a lot about myself as an artist. I gave a lot more time to my online content and got so much more time with my family and that was wonderful. But it has been quite tough in general especially for live performers.

How hard was it in the stereotypical India to wear makeup as a man? What kind of barriers did you face? And more importantly, how did you cross these obstacles?

Sushant: I am gender fluid but realised it much later in my 20s. But when I was on television as a young boy who liked to wear makeup and be androgynous, people (the audiences) were not used to seeing boys like that. I chose to break those stereotypes and pushed the envelope. Maybe that’s why people tout me as the queen supreme, a title I love and am thankful for. Also I just love breaking the stereotypes and barriers. (It) gives me a different high altogether.

Is there a story behind your first tryst with makeup?

Sushant: Yaasss. I used to try my mother’s makeup when she’d be away at work and used to love it. That was my first tryst with makeup when I was in school. I always wanted to look all glam. My idols were Madhuri Dixit and the Indian pop star divas like Alisha Chinai, Shweta Shetty, Suneeta Rao and the likes who were so comfortable with their oomph and portrayed such strong characters even through their music videos and films; especially Rekha, she broke too many barriers. She was fabulous in Madam X and Khoon bhari maang; plus, she always does her own makeup too. She’s a legend!

What’s the one thing that instantly boosts your confidence, makes you feel like ‘with this one product in my bag, I can conquer the world’ and why?

Sushant: MASCARAAAA!!!!! It lifts my eyelashes, my mood and gives me life. 5 extra strokes if it’s a Monday please.

What’s your go-to makeup look? For parties? For performances? And for stay-at-home dinners?

Sushant: I like a basic, dewy look always. Only if shoots, campaigns or performances require me to do loud makeup, I do so. Otherwise, it’s always the basic look that’s my go to saviour.

What is it the change you wish to bring about the LGBT community? What have been your efforts in this regard?

Sushant: I believe that every individual under a democracy deserves a life of dignity. We deserve respect and equity in every sphere of life. That’s just so basic. It shouldn’t even be a problem or a matter of debate. These are human rights.

Well I have been working for over a decade now to uplift the community! I’m on several panels and boards of directors for LGBTQ+ organisations. I also had the longest running column in one of India’s leading newspapers. I’m now about to collaborate with the National Institute of Social Defence under the Social Justice Ministry of India to bring about a positive change in society towards transgender individuals.

You recently forayed into music with your debut original track Diamond? What else can we expect on this front? Is there anything else aside from music you are working on?

Sushant: Yaas I did. And how beautiful it was to collaborate with such amazing people for this track. It’s even more special because my father is in the video as well.

I am also working on a couple of Indian and international films, as well as launching my own company which I’m calling HAUZ OF KO-HE-NUR which will help young artistes to be the best versions of themselves and foray into the entertainment business.

Did Instagram help you celebrate yourself the way you want? What are the pros and cons of today’s super-connected world?

Sushant: It absolutely did. Instagram named me as one of their top 25 influencers in India this year so I’m elated and over the moon. It has been a roller coaster of a ride.

There are pros and cons to everything. I was scared at first. But not I don’t really care about what the trolls and haters have to say. I know I’m genuine, and basically a nice person trying to use my platform to normalise things for the queer individuals in our society. I want to help people who don’t have a voice and BE their voice! I’ve been on a pedestal so that I can stand there and be the best version of myself which in turn can help many younger individuals who have a conflict within themselves.

Finally, what would you like to tell the young boys who’re still afraid to step out and rejoice who they are, whether with makeup or fashion?

Sushant: I would just like to say, go ahead and be the amazing person you were born to be! Don’t worry about people’s opinion, they don’t pay your bills.

Need even more inspiration? Here are some other Instagram accounts that are taking the world by a storm. Brace your hearts, these men in makeup are true heartthrobs.